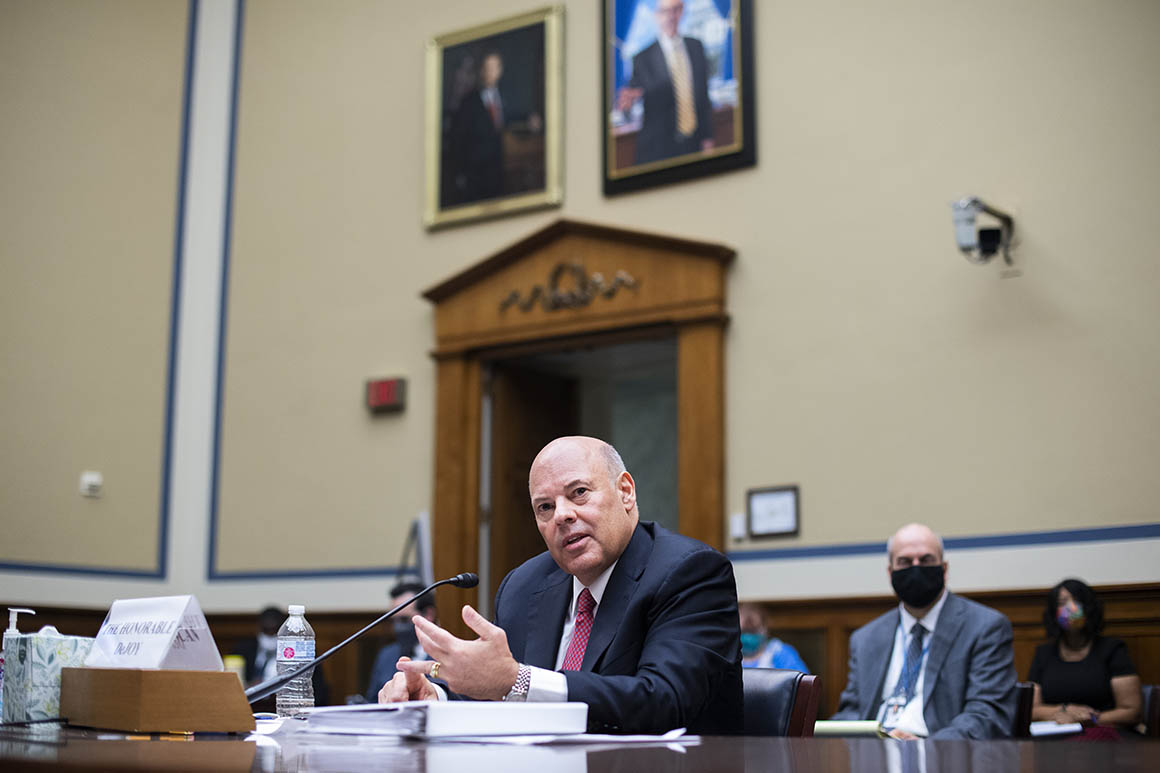 DeJoy sharply rejected the accusations that he’s taken inappropriate actions. He agreed with Lynch that postal workers deserve praise for risking their health to deliver mail on time but he insisted that any suggestion he has implemented new policies to drive up delays or disrupt mail deliver are simply “misinformation.”

“The rest of your accusations are actually outrageous,” DeJoy shot back at Lynch.

The exchange was part of a sustained barrage from Democrats on the panel aimed at Trump-appointed Postal Service leaders. DeJoy told the Senate on Friday that any delays caused by changes he carried out upon taking the role were the result of previously implemented policy changes — which he’s now paused until after the election.

Democrats portrayed the 5.5-hour hearing as a crucial milestone in an attempt to protect the sanctity of the Postal Service heading into the election and to get answers — even cutting short their August recess to hastily convene it a month earlier than it was previously scheduled. But the hearing was repeatedly bogged down by technical failures — the result of a large number of lawmakers patching in remotely — and uneven, repetitive questioning, with some lawmakers using their time to upbraid DeJoy without asking questions.

Democrats said they didn’t need DeJoy’s testimony before passing their bill, worrying that damage has already been done to weaken the Postal Service’s capacity ahead of the November elections. Trump has already indicated he doesn’t support sending new resources to the Postal Service directly because of what he has described without evidence as an attempt by Democrats to rig the election through universal mail-in voting.

The committee’s chair, Rep. Carolyn Maloney (D-N.Y.), grilled DeJoy over the Postal Service’s decision to withhold a mid-August analysis presented to him about the systemic delays the Postal Service has experienced since July. That document, which the committee received from a whistleblower, was not turned over on Friday, when the panel had asked for recent internal assessment of USPS performance. Maloney said that if the panel doesn’t receive more documents by Wednesday, “you can expect a subpoena.” Later, Rep. Alexandria Ocasio-Cortez urged Maloney to issue a subpoena if DeJoy doesn’t turn over his personal calendars since he took on the top USPS job.

DeJoy said the analysis document was put together at his request, a reflection of his commitment to addressing delays. “Oddly enough we didn’t have measurement briefings at an executive level before my arrival,” he said.

The exchanges between Democrats and DeJoy grew increasingly hostile as the hearing proceeded.

“Is your backup plan to be pardoned like Roger Stone?” charged Rep. Jim Cooper (D-Tenn.), after grilling DeJoy about whether he orchestrated illegal campaign contributions to Trump — suggestions that DeJoy categorically denied.

“I’m not going to answer these types of questions,” DeJoy said after other questions from Cooper. “Am I the only one in this room that understands we have a $10 billion a year loss?”

Pressed by Rep. Gerry Connolly (D-Va.) about his contacts with the Trump campaign, DeJoy said he hadn’t talked to campaign officials about the Postal Service but has had conversations with Trump and Treasury Secretary Steve Mnuchin.

Connolly referenced reports that DeJoy told colleagues he had reached out to Trump allies to tamp down their attacks on the Postal Service.

“I have put word around to different people that this is not helpful,” DeJoy acknowledged.

DeJoy also told Rep. Ro Khanna (D-Calif.) that he’d be willing to reconnect a slew of unplugged mail sorting machines across the country if Congress sent USPS the funding to do it.

Republicans accused Maloney and Democrats of propagating a “baseless conspiracy” about the Postal Service and rushing to pass legislation before waiting to hear from DeJoy.

“This committee is doing things backwards,” said Rep. James Comer (R-Ky.), the ranking Republican on the panel, who described concerns about mail delays as worthy of addressing but accused Democrats of whipping of a frenzy.

Appearing virtually, the chair of the U.S. Postal Service’s board Robert Duncan defended the selection of DeJoy — a wealthy supply-chain magnate and prominent GOP donor — as the postmaster general in May, saying the agency’s leaders picked him after a grueling search process that included an intense background check.

The assertion by Duncan teed up an intense clash on Monday with the House Oversight Committee, with Maloney accusing DeJoy of misleading Congress and sabotaging the postal service to support Trump’s political goals.

“When you install someone as Postmaster General after he donates millions of dollars to your campaign,” Maloney said in prepared opening remarks, “when he rushes to make changes without conducting adequate analysis, and when he withholds key information from Congress and doesn’t level with us, then people begin to ask, what in the world is going on?”

Trump continued to assail mail-in voting over the weekend, and alleging falsely that mail-in ballot drop boxes are unsecured and prone to tampering, ignoring the fact that submitted ballots are cross-checked in state databases for signatures.

“All the Radical Left Democrats are trying to do with the Post Office hearings is blame the Republicans for the FRAUD that will occur because of the 51 Million Ballots that are being sent to people who have not even requested them. They are setting the table for a BIG MESS!” he tweeted on Monday during the hearing.

Though DeJoy told senators that he has full confidence the Postal Service is equipped for mail-in ballots and is prepared to surge resources to meet the demand, Democrats on the Oversight Committee say they don’t trust his assertions and want to understand how he rose to the position in the first place.

The USPS board of governors selected DeJoy in May, succeeding Postal Service veteran Megan Brennan, who announced her retirement last fall but stayed on through the early months of the pandemic.

Democrats want to understand the role that Trump and Mnuchin played in elevating DeJoy to his position. The committee has found that DeJoy wasn’t one of the names initially offered by search firm Russell Reynolds Associates but rather was introduced into the mix by members of the board of governors themselves.

In his opening remarks, Duncan described the search process, which he said began with one goal: “to identify an aspirational leader, capable of taking the Postal Service to new heights.”

Duncan said two “executive search firms” including Russell Reynolds, provided names of candidates, reviewed their backgrounds and narrowed the list from 212 qualified candidates to 53. Then the search firms performed a more intense vetting process to whittle the pool to 14, who were interviewed by the board of governors.

The board cut the pool in half and invited seven candidates for a more intensive interview, selecting four finalists, who were subjected to additional background checks and vetting. DeJoy was unanimously selected by the board at the end of that process, Duncan said.

Democrats say DeJoy has not been candid about the scale and timing of delayed mail that has occurred in recent weeks. Though DeJoy suggested he has played a limited role in these processes, Democrats say a new document they obtained shows that the delays worsened sharply in July. DeJoy officially began at USPS on June 15.

“Our entire country is experiencing these delays as a result of Mr. DeJoy’s actions, such as his decision to restrict the number of trips from processing plants to delivery units,” Maloney said.

In his own prepared remarks, DeJoy plans to echo much of what he told the Senate on Friday, defending his selection as postmaster general and insisting his reforms are meant to fix a fiscally dysfunctional agency.

“I embrace the concept of public service as a public trust. I intend to uphold the trust that has been placed in me by the Governors, and in that regard, I have and will continue to abide fully with all of my ethical obligations, despite assertions to the contrary,” DeJoy said. “I have worked closely with ethics officials and have followed their guidance, and will continue to do so. I took this job to give back to my country and to hopefully do some good by putting the Postal Service back on a financially sustainable path.”

DeJoy said the coronavirus pandemic is the culprit for many of USPS’ recent challenges, but even amid the crisis, 99.4 percent of deliveries occur as planned.

“Unprecedented conditions over the last six months, however, have contributed to service instability in certain areas of the country that have escalated,” DeJoy said, according to his remarks.

What does it mean that most Republicans see the coronavirus death toll as acceptable?

Two officers fought in the Jan. 6 Capitol riot. Who did wrong?

The Daily 202: Marie Yovanovitch is the first of three immigrants who will testify in Trump impeachment hearings